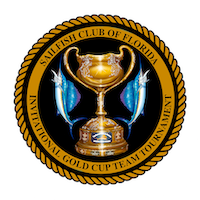 1. The Invitational Gold Cup Team Tournament is open to all teams who are in compliance with the tournament rules. If a team is a member of another fishing or yacht club, they are encouraged to fish as a representative of that club, in order to promote friendly competition among the clubs represented.

2. A team can fish three out of four days. The team will select its own days to fish. Each team must declare their fishing days by radio to the committee boat by 7:30 a.m. Failure to contact the committee boat prior to this time will be considered as a lay day for the team. Should the Weather Committee cancel fishing on any day, there will be no make-up days added.

4. Each team must have not less than two (2) anglers and not more than four (4) amateur anglers. Anglers shall be those officially registered.

4a. If a registered angler is unable to fish on any given day, an alternate angler may fish in place. Alternate anglers must submit a signed released form and be approved by the Executive Committee. Alternates may register by phoning the Sailfish Club or the Tournament Chairman and deliver a signed release form to the Club, in person or by e-mail by 7:30 a.m. sharp the day of substitution (please include which angler you are substituting).

4b. Amateur Anglers are defined as not having engaged in commercial fishing or receiving monetary remuneration at any time, for guiding, crewing or captaining within the past three years. (Calcutta payments are excluded.) Teams who are discovered having a professional crewman will be disqualified for the day. (Sports writers accepted.)

5. No more than four (4) lines with hooks are permitted out from any boat at ANY TIME.

6. Teams will furnish their own boats, boat crews, bait and lunches.

7. Boat crews will be limited to one captain and no more than two mates. NO PROFESSIONAL CREWMAN may be aboard during fishing as a "guest."

A. CIRCLE HOOK
This is a CIRCLE HOOK tournament. Only fish released on single-circle hooks will be counted on scoring. Circle hooks must not have any offset.

B. LINE
Only 20 lb. TEST LINE MAY BE USED. Double line, if used shall be limited to 15 feet. The combined length of the double line and leader shall not exceed 20 feet. All lines will be subject to random testing and inspection by the Tournament Committee.

Backing is permitted as long as it complies with IGFA rules.

B. TEAM SCORES
Catches will be combined to determine team scores. In the case of boat breakdown, the committee must be notified. Team scores will be transferred to a replacement boat. The replacement boat must not be participating in the tournament.

C. CREW SCORES
Crew scores will be the same as their team scores. Crew scores are transferable, in the case of a boat breakdown, providing the same crew is used.

D. RECORDING OF SCORES:
The following must be reported to the Scoring Committee: Team Number, Angler’s Name and THE TYPE OF BAIT USED. The time will be the time recorded by the radio operator. Each fish reported may be fought until caught; any fish hooked after 3:30 p.m. is ineligible.

Ties will be broken on time – the team reaching the tie score first will be the winner. The numeric day of fishing for the teams or anglers in question will be used to break scoring ties.

To facilitate early posting of team scores the RADIO LOG WILL BE THE OFFICIAL SOURCE OF INFORMATION DURING FISHING HOURS; boats (teams) reporting fish caught must turn in daily report forms for OFFICIAL SCORE and verification of posted scores by the time indicated in (4); failure to comply with (4) will result in the loss of this day’s score plus a 50 point penalty. In case of a boat breakdown, notify Committee and the reporting time will be extended accordingly. THE BOATS MUST TURN IN DAILY REPORT FORMS AT THE CENTER DOCK OF THE SAILFISH CLUB BY THE DEADLINE FOR OFFICIAL POSTING. ONLY SCORE SHEETS TURNED IN TO THE CENTER DOCK INDICATING THE TYPE OF BAIT AND TIME WILL BE CONSIDERED OFFICIAL REPORTS. TEAM CAPTAIN’S SIGNATURE REQUIRED

Reporting Times: Boats must leave and return at the Palm Beach inlet EACH DAY and return to the Sailfish Club to report fish by 6:45 p.m.

11. In order to qualify a billfish as having been caught and released, only one team member is permitted to set the hook, fight and retrieve the line until the swivel or leader touches the rod tip. Once a team member has set the hook, no one else may touch the road at the time until the fish is released.

12. Any fish mutilated in such a way as to impair its fighting ability from the time of hooking to the time of release or boating is ineligible for entry.

13. A broken rod will disqualify the entry.

14. The following are not permitted: nets; backing into schools; more than one hook per bait; use of hooks in teasers (there is no limit on the number of teasers); spinning tackle; one fish hooked by more than one line. Prospecting is permitted.

NOTE: LIVE BAIT AND LIVE TEASERS MAY BE USED BUT ONLY COUNTS FOR LIVE BAIT POINTS. (The use of kites is permitted.)

15. All anglers and crew must remain in the cockpit when attempting to hook or fight a fish, unless they are fishing from a boat specifically designed (such as a walk-around) to safely accommodate such actions. If a team is fishing in a boat designed for this purpose, they must notify the Rules Committee at or before the Captain’s meeting. A violation of this rule will result in forfeiting all team points in that day’s fishing.

16. The Committee would like to stress that this is an honor system tournament with each team captain and co- captain being responsible for their team’s compliance with the rules. Any angler or Committee person witnessing a rules violation should enter a protest by reporting the violation to the Protest Committee no later than the same time scores for that day are turning in. Protests must be in writing and only to the Protest Committee.

18. The Tournament Committee has the authority to cancel any day’s fishing, alter boundaries and change fishing hours.

19. Minimum boat length is 30 feet. Please obtain your fishing license prior to the tournament.