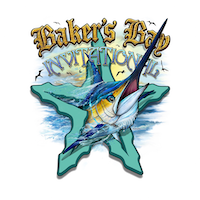 The Captain’s Meeting will be held Thursday at 6:00 PM at Marina Village.

You must have a Bahamas Fishing Permit.

Boats may leave the marina at sunrise. All boats must be inside the Baker’s Bay Breakwater by 6:00 P.M. each evening for your fish to count, unless hooked up and extra time has been granted.

55 nautical mile radius from the marina.

When entering the “Breakwater” at Baker’s Bay, please check in with the committee boat on channel “72”, and notify if you have fish to weigh.

You must call in all hook-ups of all BILLFISH as soon as you confirm it is a Billfish. The “Committee Boat” will validate your hook-up time reported. Then you must call again to report lost or released fish to the committee boat and get your Species and time confirmed. Please make certain that the committee boat has confirmed your data.

Each boat is required to record on the Catch & Release Form all billfish caught and released in the order that it appears on its Catch & Release video or photo’s. This form will be available in your boat information packet.

PLEASE DO NOT report Tuna, Dolphin, or Wahoo.

Committee boat channel is 72.  Please use alternate frequencies for conversations not related to the reporting of billfish.

An angler may fight a fish until it is lost or released so long as it was hooked and reported to the “Committee Boat” prior to “lines out of the water.” A billfish caught after 12:00 midnight on the first day will count as a release for the day second.   A confirmed hook-up that results in a released fish on the last day of the tournament must be released by twelve midnight.

In case of a tie for Top Boat, placement is determined by the earliest verified reported time of release.

A billfish is considered officially caught and released when the swivel hits the tip of the rod or crew member grabs the leader or the wind-on leader (not the double line) comes into the rod tip. Video verification is required for the billfish catch to be eligible.

Catch & Release winners are determined by points which are earned as follows:

Catch & Release verification videos/photo’s and forms must be turned in to the video judges at the Office between the hours of 4:00 pm and 7:00 pm on each day. (unless hooked up and extra time was granted).

In the event of a tie in Catch and Release points, team placement is determined by the earliest verified released times.

All recordings submitted for the purpose of verifying a Catch & Release entry must include the following:

Checks will be written the following week after the Tournament Awards Ceremony on Saturday.

Due to the USA laws and the International banking laws, we have decided to use a USA bank to hold the funds. Due to the USA laws, the winners will receive a W-9 to complete in order to receive their prize money.

The Tournament accepts no responsibility for the division of any cash awards between team members.

90% of all Calcutta Fees collected are distributed in the form of Optional Cash Awards.

Except for the Captain/Crew category will be paid 100% of the entry.

Participants who wish to pay the Calcutta fees prior to April 15th, may pay by personal or company check made payable to:
Otherside Fishing Inc.
4440 James Rd.
Cocoa, FL 32926

Participants who wish to pay the Calcutta fees after April 15th must wire transfer the fees or have US Currency at the registration on Sunday April 24th of tournament week, between 1:00 P.M. and 5:00 P.M. NO CHECKS ACCEPTED.